J.O. Mahoney spent the first twenty-one years of his life in Dallas, Texas, four of them as an art major at Southern Methodist University from which he graduated in 1928. He spent the next three years in New Haven as a graduate student in the prestigious Yale art program where Mahoney was a star pupil of its most influential artist-teacher, Eugene Savage. There he learned a discipline based on the formal and technical practices of the Italian Renaissance, and became a master of the tonal graduations, volumetric modeling and responsible craft of that mode.

In 1932 he won the Prix de Rome and spent three privileged years as a fellow of the American Academy and occupied a studio in the Academy’s McKim, Mead & White palazzo on the Janiculum. During that time he was overwhelmed by the beauty and the grandeur of Italian art and architecture, and like many another winner of the Rome prize, was marked for life by the experience. He fell in love with all of Italy, and with the culture, and the here and now, of a people and a life that have charmed Americans since before the time of William Dean Howells.

When he returned to New York in 1936, he was ideally prepared to participate in

the revival of mural painting in America. He was deluged with mural commissions, including an assignment to paint several panels for the Texas Centennial Exposition, two murals for the New York World’s Fair, and murals for private houses in New Haven, San Antonio, New York City, White Plains and Greenwich. In 1939 he won a national competition to paint a third mural at the World’s Fair, a 104 by 34 feet painting for the Federal Building. When the vogue for murals later faded, as American artists preempted that scale for use in easel painting, Mahoney continued to produce murals and reverse glass paintings for various buildings in Baltimore, in Atlanta, in Ithaca, and elsewhere. All these works are distinguished by their suitability to site, an Art Deco opulence and by impeccable workmanship.

Mahoney accepted an invitation from Dean Gilmore Clarke to join the faculty of the College of Architecture at Cornell in 1939, and for the next three years commuted between his apartment in New York and his studio in Ithaca. In 1942 he joined the Army Air Corps and after a year of officer training, was sent on detached service to a British post in a country house near Twickenham, where American and English specialists interpreted aerial photographs of enemy territory. During this period, until the end of the War, he enjoyed a kind of English, aristocratic wartime dolce vita, living in the setting of some of the Edwardian novels and biographies that he was fond of, and visiting some of the stately homes he had formerly known only from books.

He moved his possessions from New York to the Faculty Club at 1 East Avenue on the Cornell campus in 1946 and renewed his teaching responsibilities. Though he never abandoned the precepts he learned at Yale, he adapted his theory and methods to a form of modified surrealism, combining trompe l’oeil elements with real found objects in a style that generated a sense of ambiguity characteristic of much of mid-twentieth century American art.

As a teacher, Mahoney was conscientious and fair. He was not one to motivate students by permissive amiability, but generously offered his sophisticated insights on architecture and art to all those capable of response, and he kept his students on their toes and beguiled them with his witticisms and his exotic eccentricities.

During his term as chairman of the Department of Art, he fostered a program that brought well-known contemporary artists to Cornell to present their views and to participate in critiques of student work. His introductions for the public appearances of these celebrities were often more enlightening than the “lectures” that followed. Throughout his life as artist-teacher Professor Mahoney maintained a bemused detachment from the egocentric passions and professional politics of the art world.

Mahoney had a complex personality of contrary impulses and paradoxical affinities. While actively engaged as a practicing visual artist, he was at the same time an avid reader, with strong literary opinions. His interests ranged from the occult, to aesthetic theory, to the latest fiction. Because he had read so widely and perceptively and because he had a gift for vivid and mordant repartee he found himself at home among a group of tough-skinned members of the English Department. Although he was trained in the grand traditions of the Renaissance, and his own work had an Art Deco flamboyance, he had a surprising regard for the intimate and bucolic images of Samuel Palmer, the neo-primitive work of Henri Rousseau, and the deceptively simple small-scale paintings of Giorgio Morandi. His other visual interests included such diverse manifestations as Chinese wallpaper, high- style furniture, primitive sculpture, and formal gardens. And though his ruthless wit sometimes gave pain to his companions, his good will and good humor endeared him to a large circle of friends in the Cornell community some of whom came to rely upon his Good Samaritan instincts. He was almost Franciscan in his reverential devotion to all animals. He fed both cats and mice; during the winter he bought food for deer and raccoons; and for the last nineteen years of his life he was devoted to a mynah bird, Rover, who lived at large in Mahoney’s house.

Of that house, Colin Rowe has written as follows:

“A mynah bird, a superb white porcelain Bavarian Rococo stove, an oversize gilt gesso Chinese Chippendale mirror, which had remained in situ in Old Burlington Street, London, until it was acquired by William Randolph Hearst and then by Nina Claiborne of Dallas, Texas: these are among the most prominent memories of 45 Twin Glens Road; and they all of them served to establish the scale and the distribution of the house.

“In spite of disclaimers, J.O. Mahoney was fundamentally a Texan; but, like so many Texans, a Texan Italianized. Thus, at Twin Glens Road, almost simultaneously, one can feel oneself to be in Lampasas County and in some imagined but undiscovered country to the north of Rome. The long driveway leads through what appears to be a forest of mesquite — tumble weed and live oaks significantly lacking — to what could be called a cour d’ honneur. Graveled, immense (as a Texas size parking lot should be), it is still of intimate proportions and a completely appropriate prelude to the house which follows — the house looking over a version of the Lago di Bolsena.

“Perhaps it would not be too extreme to suggest that the years J.O. spent as a fellow of the American Academy in Rome were the decisive years of his life. Despite his exposure to other venues, J.O.’s ultimate references were mostly Italian; and the house remains a witness to considered impressions gathered from Frascati, Tivoli, the Villa Chigi-Albani at Soriano, and others.

“Though a very American, and Texan house, in its exploitation of site (like no other house in Ithaca, it magnifies the lake views), in its manipulation of perspectives and levels (both internal and external), in the eclectic assembly of its furniture (including chairs from the ballroom of Andrew White’s Embassy at Berlin), in a peculiar combination of primitiveness and connoisseurship (brick floors and vermeil tableware), it is still intended to evoke recollections of hours spent at Caprarola and the Palazzo Rospigliosi-Pallavicini. In other words, it is an American house by which a latter day Henry James might be intrigued.

“Of course, it was never finished. J.O. was far too good a craftsman, with far too many fantasies to allow anything ever to be finished. But by no means was he a craftsman in the ideal sense which John Ruskin and William Morris conceived. No. Any suppositions of truth and sincerity to materials, were completely alien to his temperament. Quite shamelessly, as an Italian craftsman might, he preferred the false, the fake, the simulated to the real; and it was this preference which gave 45 Twin Glens Road its emphatic distinction. The fantasies which the house deployed controlled the conservation.

“Many would say that 45 Twin Glens Road was J.O.’s major achievement and his major act of self-disclosure. An Italianate villa done on a budget, it displayed all those notions of bella figura which, in his own person he was reluctant to advertise. In later years it was kept as private and as secret as he kept himself reclusive; and any suggestions of photographs and publication were vigorously resisted.

“Those who reverence the perceptions of the eye, those who are concerned with the act, and the integrity of ‘making’, will understand what James Owen Mahoney was all about. An obsessive builder, he spent the last years of his life in laboring over a temple or grotto on the east terrace at Twin Glens Road. An Italian fragment seen through the eyes of an Eighteenth-Century English grand tourist! Cold reason would have argued against any undertaking quite so gratuitous. But, in every sense, it turned out to be a doubly extravagant success. J.O. was completely immune from the desolating threats of any, imaginary, Hegelian Zeitgeist.”

What gave integrity to his life, his work, and his taste was his consuming pleasure in the aesthetic experience of line, form, and color, his respect for the creative powers of artists and builders, and his lively interest in the history of art. All these humanistic traits were nourished by a humility and a reverence for a deity he often referred to as “Old Gooseberry”. On the day before his sudden death (three days after his eightieth birthday) he entertained a friend at lunch by raising an old topic about man’s need for a reasonable religion — and by explaining why he was so pleased to have discovered that morning a book containing a good photograph of the cast-iron vaulting in the conservatory of Carlton House in London.

Mahoney left his library (about 7500 volumes) to the Cornell University Libraries, all the paintings in his possession to the Herbert F. Johnson Museum, and his house and its furnishings to the Unitarian Church of Ithaca. 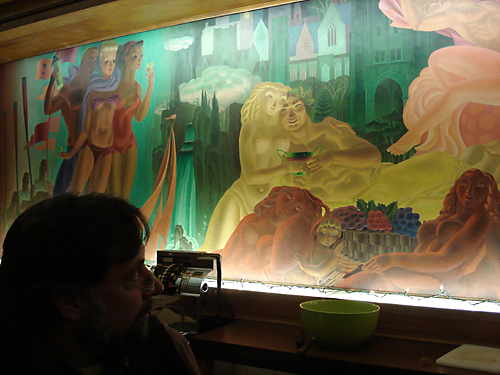 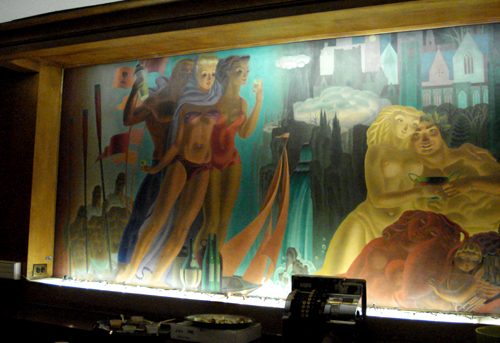 The Mural Lounge was completed in 1949. J. O. Mahoney, then Professor of Art at Cornell, painted the mural which gives this room its name. At Left are the falls, buildings at Cornell, and figures representing notable University activities, boating, swimming, crew racing, and “general conviviality”. The Central grouping contains characters from mythology headed by Bacchus, god of wine and merriment. A Centaur – half man, half horse – and assorted nymphs complete this area. On the Right are prominent city buildings, including the Clinton House, and figures suggesting Ithaca College specialties, drama, music, photography and physical education. 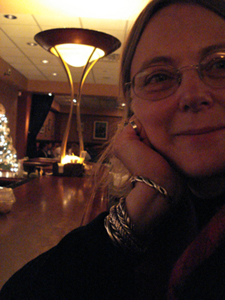